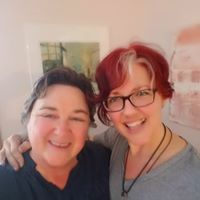 In 2009, Val & Tess began writing a series of songs together and quickly decided that their musical connection would make a great duo. The musical duo plays in their local area as "The Val & Tess Duo" but felt that another name would be better suited as they began their CD adventure. With much consideration to the original music they shared, the duo came up with the name "The Plaid Dragonflies-Val & Tess Duo". Both singers and songwriters felt that the name was a great fit for representing their shared passion for music & life as well as creating a positive image of inner strength and light.